From Barbados to Bath - Untold Histories

In July, we were excited to launch Untold Histories of Bath: From a Barbados Plantation to the Holburne Museum, a film made in partnership with local young people and the Holburne Museum in Bath that explores the legacy of slavery in the South West.

In the film, young people respond to the Holburne’s redisplay of a book from a plantation in Barbados, Black activism in the South West, and new research that explores Bath’s connections to plantation ownership and the transatlantic trade of enslaved people. The film is the third in a series of Boys in Mind films made with young people in response to the issues raised by the Black Lives Matter movement. Our first film was simply called Black Lives Matter,  while our second film in the series addressed Race Equality in Schools. This, our third film, takes a closer look at the trans Atlantic slave trade by looking at the links between a plantation in Barbados and it’s links with the genteel city of Bath and is called “Untold Histories of Bath: From a Barbados Plantation to the Holburne Museum“.

The online premiere featured speakers from the Holburne Museum as well as the young people involved in the film and all of the free tickets were snapped up within hours of being released. The film is now available on our website and can be found by clicking the link above.

The Plantation Day Book re-display can be found on the Mezzanine Fletcher Gallery at the Holburne Museum. Click here for more information.

This month, Jo Symmons joined the BiM team and will be taking over much of communications work previously done by Kit Harrison. We’re delighted to welcome Jo whose background not only includes working with young men in social care but she also comes to us with a wealth of marketing and PR experience which will help Boys in Mind reach a wider audience both locally and around the UK. You’ll be hearing more from Jo in future news pages as well as through our social media channels.

We’ve previously reported on our involvement with Project Soothe at St. Mary’s Catholic Primary School so we are really happy to share the film we made about the project.

Project Soothe, led by Professor Stella Chan of Reading University and clinical lead for the Charlie Waller Trust, aims to improve mental health and wellbeing by collecting and sharing a bank of soothing images. Pupils and staff at St. Mary’s were asked to share photos of things that they find soothing and these were then collected into an exhibition.

The project has made a positive effect on the whole school community and we hope the exhibition will be shared with local community groups. So far, the film has proved very popular with over 750 views via Facebook alone and you can watch it too by clicking here, and why not drop us a line with your feedback.

In Conversation: LGBTQ and Mental Health 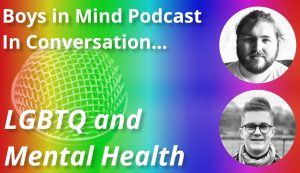 This month Levi recorded the latest of their ‘In Conversation’ series of podcasts with Will as a guest. They both talked about being a part of the LGBTQ+ community, touching on the impact that this may have had on their mental health, as well as how they have coped with some of these challenges. As well as these discussions around mental health, they touch on some of their personal experiences, advice they would give to their younger selves and much, much more. Keep an eye out for this podcast coming very soon!

As part of our campaign to educate people about the mental health issues faced by young men, Will, our roving Youth Advisor, met with the newly appointed Police and Crime Commissioner for Avon and Somerset, Mark Shelford, to learn more about the mental health provisions for Avon and Somerset Police force and the work that they are doing. All too often, the police are called to deal with young men who are suffering from mental health issues and Will was able to discuss how Avon and Somerset deal with these situations. Although they have policies and procedures in place, they are keen to develop them even further and Will is now in talks to discuss how Boys in Mind/Girls Mind Too can work with the Police Force to do some important, impactful work; so watch this space for future updates! Next month BiM Youth Advisors Henry and Will are presenting a workshop at SF24/21, a global Solution Focused conference which last year included around 2000 attendees when it was run for the first time. At this year’s conference, Henry and Will will be talking all about Boys In Mind/Girls Mind Too’s journey to becoming a Solution Focused organisation and the impact that using SF can have when having conversations surrounding male mental health. This year the conference is expected to be even bigger, with some very special guests, and it’s open to everyone! To find out more about this conference click here or you can sign up and come along and take part by following this link. As usual we’ll update you on the workshop in future issues.