In November, after months of zoom meetings and planning, Kate, Andrew, Will and Susie from BiM finally made it over to Belfast in Northern Ireland where they were honoured to formally launch our partnership with the fabulous Lighthouse Charity. Based in Belfast, the Lighthouse Charity is an organisation committed to the prevention of suicide, the promotion of positive mental health and the provision of support services to families who have been bereaved due to suicide.

During the trip, the BiM team got to meet young people and staff working with the Lighthouse Charity, as well as other young people and families from around Belfast. They also had the opportunity to meet up with members of the McCracken family – Lewis McCracken sadly  took his own life in April 2020 and, following his tragic death, his family and friends raised over £10,000 for Boys in Mind. We have dedicated some of our films, webinars and other resources to Lewis but had always wanted to do something specific in Northern Ireland to combat the stigma around mental health and suicide.

As part of the partnership between BiM and Lighthouse Charity, we will be producing a series of films, in collaboration with young people and families from the Belfast area that explore suicide and what helps. We hope that these films will be shown widely in schools and other settings as a way to raise awareness and normalise conversations around mental health and suicide.

Commenting after the visit, Gary Symington from the Lighthouse said:

“It was an honour and a privilege to welcome our friends from Boys in Mind and Beechen Cliff School to Lighthouse in Belfast.   Kate, Susie, Will and Andrew brought a great energy and demonstrated a genuine interest in our young men’s work.   To have the opportunity to meet some of our young men and allow them to talk openly about their experiences and to have their comments recorded for a potential video, was excellent.   Hopefully this will normalise the current emotional difficulties faced by many teenagers, as well as showing them examples of what helps.   We look forward to working in partnership with you all in the coming months.   Many thanks“.

A big thank you to the Lighthouse Charity and the people of Belfast who were so welcoming and we’re much looking forward to developing our partnership even more in the future. And of course, keep an eye on our news pages for future details. 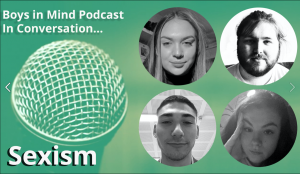 In this month’s episode of “In Conversation”, myself and a group of students from Ralph Allen School in Bath, discuss the topic of sexism. A highly pertinent topic in the wake of the Me Too movement, and other even more tragic recent events. My guests (Elle, Fedi and Ruby) share their thoughts, not just on sexism but what we can do to shape the conversation and lead to a more positive environment and society. I hope you’ll enjoy listening to this episode as much as I enjoyed hosting it. Click here to listen.

We’ve featured Community Matters, a community based charity shop, several times in previous news pages because of their support for local organisations, particularly BiM. But now they really need your help. So, if you want to get into the festive spirit and can give up some of your free time to a worthwhile cause, now’s your chance.

With Christmas just around the corner, Community Matters anticipates being busier than ever and need help running the shop. They are looking for several new team members to help out in the run-up to Christmas and possibly for longer.

If you, or anyone you know might be interested – get in touch with Michelle at Community Matters. You can drop in, email, text or phone, you can even do a trial shift to see how you get on!

BiM filmmakers have been very busy over the past few months with several projects in various stages of production and more projects planned for 2022.

We recently reported on the production of our much anticipated latest film, dealing with mental health issues within the LBGTQ+ community, and we’re please to announce that that the film is now in post production and will be ready for release in the New Year and it’s hoped that we’ll be able to do an official film launch/ premier at a venue in Bath (Covid restrictions permitting) where we are planning to invite everyone who was involved as well as friends, family and the wider community.

We’ll keep you updated with details of this and all our other new releases in future news pages – so keep watching this space.

Fundraising at the Bath Half

After the lockdown restrictions forced the cancellation of the Bath Half 2021, we are very excited to be a part of the Bath Half next year, which will be held on March 13th 2022 (fingers crossed!). We have put a great team together who will be running to raise funds for Boys in Mind and over the next few issues, we’ll be introducing you to our runners and updating you on their progress. We’ll also report back from the Bath Half with detail of how Team BiM fares on the day.

If you’d like to support our runners and Boys in Mind,  you can donate now, simply click on the following link to go to our JustGiving page. Every donation is very much appreciated. Donate now