Pupils at St. Michael’s Junior Church School in Bath have helped to develop a Boys in Mind/Girls Mind Too version of the Anger Volcano. Anger is often the way that children and young people, especially boys, express difficult feelings they are experiencing. The Anger Volcano resource is a way of exploring causes of anger which helps young people to recognise what causes these feelings and to think about what helps them to feel calmer. Our short booklet is a free resource for anyone to use. It is formatted to print as an A5 booklet and can be downloaded here. There has been lots of positive feedback and coverage of our Black Lives Matter film featured in our September News – Click here to see film. It has been shown in local schools, universities and has been circulated widely. Lucia, our Youth Advisor, and Ben took part in a webinar organised by the B&NES Council Leader, in which BAME young people spoke passionately about the racism they had experienced and what they would like to see happen in the future, such as:-
• It should be more than Black History Month. BAME issues need to be embedded across the curriculum.
• There is a need to for more BAME teachers / wellbeing staff to act as role models or to provide culturally appropriate support.
• Young people need to be taught how to call out racism and oppose it (sessions in PSHE lessons).
• Black culture should be celebrated; it should not just be about the history of slavery, although it is important that we know about this.
• It would be useful to highlight some local BAME people of significance e.g. Haile Selassie, Emperor of Ethiopia, spent some time in Bath.
Boys in Mind has funding from St John’s to make another film. This will be a partnership film between BiM, B&NES and Black Families and will be about identifying good practice in secondary schools in B&NES around anti-racism.  The film will mainly be young people talking about what they feel their schools are doing well to tackle racism and this will then be edited into a short film so that we can share this good practice around other schools.
In the meantime, Eli, Lucia, Ben, and Sam who were in the film are in demand as speakers and bloggers and Lucia will be speaking on November 2nd at a national health inequalities workshop for mental health support teams. Our film ‘Being Black’ has been nominated at the LGBT Los Angeles Film Festival!

In the film, which was shot in January 2020, Wayne Mertins-Brown movingly talks about how his father moved to the UK as a duty to the ‘father country’. For Wayne, living in the UK now, it’s a different story. Watch the film here. Wayne described why he took part in the film: “As a therapist, I’m only too aware that growing up in today’s society can be a huge challenge, especially for boys and young men. Many find it hard to open-up about those challenges and reach out for support. I took part in the interview because I want our boys and young men to grow well and thrive. If hearing something of my story could help in that regard, I was up for it!”
Congratulations to film-maker Andrew and Wayne for collaborating on an outstanding piece of work!

Wayne also featured in our Role Models Q&A last month so for more of his inspiring story, click here. 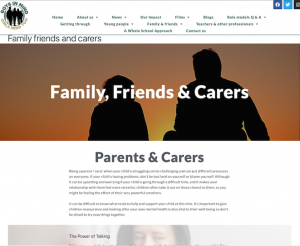 We have added a new page to our website dedicated to providing advice and support to family, friends and carers of young people. Being a parent/carer or friend of a young person who is struggling can be challenging so we’ve created a collection of useful resources, including helpful films, practical ideas such as the Anger Volcano, and lots of advice from young people on what helps them when they are experiencing a difficult time. We will keep this page updated with new resources so bookmark it now!

Linking up with Jigsaw

We are delighted to have formed a new partnership with Jigsaw PSHE – a widely used and effective PSHE scheme of work for children and young people aged 3 – 16. Central to the Jigsaw philosophy is the need to nurture and support mental health and wellbeing by providing opportunities in every Jigsaw lesson for children and young people to support their own mental health through learning Mindfulness techniques.

We are thrilled to be working with Jigsaw and one of our lead Boys in Mind Primary schools to produce a film showing the impact of Mindfulness in schools as part of the whole school approach. We are still in the early stage of planning but are excited at the prospect of showing all our schools how these simple techniques can have a big impact on children and young people themselves.
We are also hoping to deliver a film for Secondary schools along the same theme over the coming months – watch this space!

Our two new Primary Champions were introduced to each other this month when Finn, a Year 5 at Swainswick Primary School, met Jackson, a Year 6 pupil at Paulton Junior School, for a hot chocolate and planning session.

Their meeting of minds was creative and productive. They have both written lovely blogs that describe how their schools support them, help them develop as people, and make them feel valued and safe. To read their blogs click on Jackson’s blog or Finn’s blog.

From this month, our Primary champions are teaming up to create the monthly Wellbeing Challenge. Here’s their first joint venture and it’s a tasty one!

“This month why not create your own healthy recipe? It could be inspired by one you already know. Using fresh fruit and vegetables is a great way to keep both your body and mind healthy”.

So email your recipes to comms@boysinmind.co.uk If we get enough, we may even see if we can turn them into a Boys in Mind/Girls Mind Too recipe book, so keep your eyes (and your onions) peeled!” Saturday the 10th of October celebrated World Mental Health Day. Created by the Mental Health Foundation and World Health Organisation, the day is aimed at raising awareness of mental health issues around the world and mobilising efforts in support of mental health. This year’s theme was ‘Mental Health For All’ in recognition that we have all experienced a difficult year in the face of a global pandemic that has left many of us feeling isolated and worried about our health and livelihoods.

It is highly likely that the need for mental health support will increase in the coming months and years with the effects of the pandemic so improved investment in our underfunded mental health services is increasingly important. As ever, we would encourage everyone to support their family and friends. Remember, you don’t need a reason to give someone a call and even just a catch-up chat can be a great mental health booster. We have lots of great resources on our website, from films and blogs to advice for people who need help now.

You can support our work by donating via our JustGiving page, just Click here.

This month’s Role Models Q&A met Adam Volsen, a multi-talented musician who is one half of feelgood band The Allergies, described by Craig Charles as “funk and soul for the 21st century”. Adam told us how a trip to the Glastonbury festival had a big impact on his life as a teenager and discussed the impact the pandemic has had on musicians. He also explained how boosting mental health is at the heart of all he does, whether he’s making funky dancefloor fillers or running music workshops for young people. Read his fascinating story here.

This month, we celebrated both National Coming Out Day (October 11th) and International Pronouns Day (October 21st) and Will, one of our Youth Advisors, attended two LGBTQ+ inclusion workshops run by Chloe Foster of Sussex Rainbow Counselling. The first was Sucidal Ideation in LGBTQ+ Clients and the second was about Pronouns (specifically the use of Gender Neutral Pronouns). There was some very valuable information shared, surrounding things to be conscious of with LGBTQ+ people, not just in a therapy session but generally as well. Will wrote up some notes on each workshop, so feel free to get in touch if you’d like to know more by emailing comms@boysinmind.co.uk