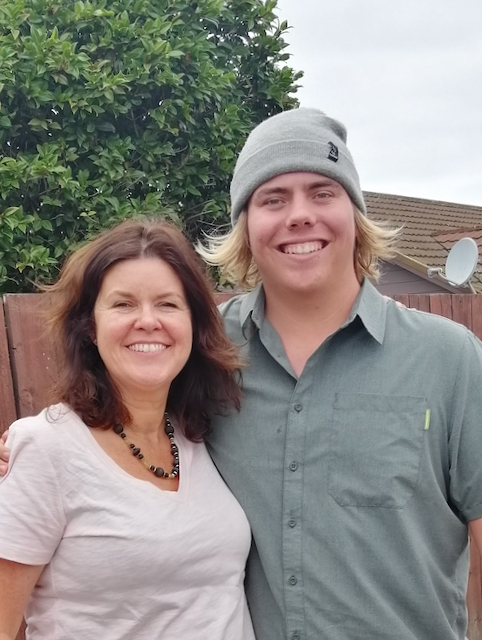 As I flip through holiday photos, I am reflecting on how fortunate I was to have had the most amazing trip to New Zealand last month. Not only was I lucky in being able to go and manage to get home just days before the world went into ‘lockdown’, but also I had the opportunity to meet a particularly inspiring young man while I was there.

So, I was having a great adventure driving up the west coast of the South Island which has incredible and changing landscapes of forests, mountains, glaciers and windswept, almost dystopian, beaches with hardly a soul in sight. Picking up hitchhikers is sadly not something I would normally do due to all the media-fuelled anxieties and ‘what ifs’, but on this trip, spurred on by the encouragement of my Kiwi friends that all would be fine, I decided to do so and I’m so glad I did as  getting to meet travellers from all over the world was one of the highlights.

Half-way through my road trip as I was leaving Lake Rotoiti at a particularly beautiful spot called St Arnaud, I drove past a young chap hitchhiking, so I stopped and picked him up. With a smile the length of South Island he politely introduced himself as Blake Walker as he bundled his huge backpack into the back of the car. It turned out that Blake had been waiting for an hour and only 3 cars had been past so just as well I stopped!  I was headed north to a town called Blenheim which worked for him. The conversation flowed freely and I was struck by his modesty. While I was busy boasting about my fairly pathetic hikes (or  ‘tramps’ as they call them in NZ)  it was only from me asking him lots of questions that I discovered that he was two thirds of the way through the most incredible challenge of walking the entirety of New Zealand, his home country.

He had set off in December 2019 on a 4 month journey down the Te Araroa trail starting at Cape Reinga at the tip of the North Island aiming to finish in Bluff at the end of the South Island.  This is over 3000 km and when I picked him up, he had already walked over 2000km!  Most of this was on remote mountain trails, wild camping or staying in the rustic tramper huts, boiling spring water, and generally living like a Kiwi Bear Grylls. So, you may well ask what was he doing hitchhiking?  – He was actually doing a ‘double back’ to stock up on supplies as he had already walked the distance. It turns out Blake is the youngest person to undertake this trek as a solo expedition and he was only 17 years old when he set off!  If this wasn’t impressive enough, I asked what had inspired him and he said he was raising money for mental health having had experience of someone close to him suffering poor mental health and also learning of the sad statistic that one in 4 New Zealanders are affected by mental illness at some point in their life.  He really wanted his expedition to be a  chance to raise awareness and hopefully some funds for the NZ Mental Health Foundation. I told him about Boys in Mind and he thought it sounded great and he was keen to look into similar organisations in NZ.

Although feeling connected to others feels quite difficult at the moment as we are locked into our homes, I hope sharing this story helps to remind us of our shared humanity, that  the world can be a small place and a reminder of the wonderful things young people are doing everywhere to challenge stereotypes and make a difference.

I also got a real kick out of the fact his name is Blake Walker!